Concerning the pride and shame of being a good soldier

Secret Choices, a novel based on the life of the author, shows the personal costs of war and follows a combat veteran through a different kind of battle. A battle every veteran must win if they are to reconcile the moral injury of combat and return home from their war.

When the man he thought was his ally accuses him of murder, Tom Warden has a choice – He can hide from the truth of what he has become in order to survive, or open his heart and be the point man of his own life.

Tom is in his late thirties and still single. He grew up on a farm and had dreams of being a research scientist. A year of combat in South Vietnam has changed his past and rules his dreams.

Sarah is strong-willed and independent. It is her way of surviving in an unsafe world. She has fallen in love with Tom Warden and is learning that the love between them can be a blessing and a burden.

Detective Roche looks like he was born wearing his brown leather jacket. If you ever met Roche you knew his eyes were the windows to your soul.

Secret Choices finds the triumph and tragedy in man’s primal nature and shows the personal costs of war. It transforms PTSD, from a mental health issue, into the need for friends, family, community, and the nation, to heal the hearts of their soldiers. 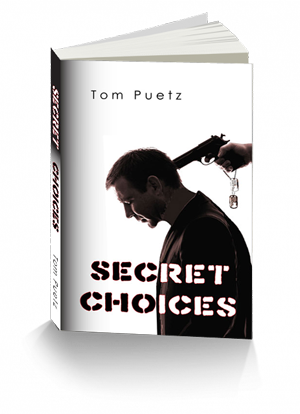 Join My Newsletter for Updates

Want to know when my next Blog Post, Poem, or Article is available?

Get updated when new Events are available!