Choices that Changed My Life

I am the youngest of four. My brother, two sisters, and I grew up on a farm in Indiana. I made my first major life choice in the middle of my sophomore year of college. I decided to drop out, knowing I would lose my student deferment and be drafted. I left Purdue University in the winter of 1967, was drafted into the U. S. Army, and trained as an infantry rifleman. After more special training, I was promoted to sergeant and sent to Vietnam. I arrived in the country on December 15, 1968. My tour of duty, as a squad leader in an infantry company, changed me in ways I would not understand for three decades. I arrived back in the world on December 15, 1969. My release from active duty took place the next morning in Oakland, California. I made it back home for Christmas.

For the next fifteen years, I drank a lot. I didn’t think I had a drinking problem because I only got drunk on weekends. The twenty jobs I had during that period ranged from installing steam boilers to night manager of a clothing store. In 1985, I moved to Massachusetts. 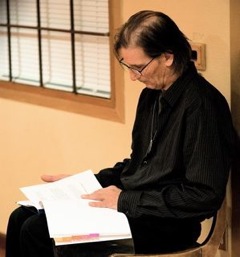 I suppose I might have been running away, but I told myself I made the move so I could get my life back together. I found steady work and fell in love. Falling in love would have worked out if it weren’t for my worsening symptoms of post-traumatic stress disorder. PTSD Was the new name for battle fatigue (WW II), or shell shock (WW I), or soldier’s heart (American Civil War). A soldier’s heart is what I had, and I did not open it to the love of my life. In 1990, she moved on. I moved to Arizona.

I suppose I might have been running away, but I told myself I made the move so I could get my life back together. I decided to pick up where I had left off twenty-five years earlier when I dropped out of Purdue University. In 1995, I graduated from Northern Arizona University with a B.S. in Engineering. I learned a lot in those four years. The most important thing I learned was, I didn’t want a career in mechanical engineering. However, the technical expertise was invaluable, and I was able to start my own electronics assembly business. That was a start but living with PTSD was a miserable existence. I had no friends. There was no joy in my life. My struggle to find a better existence led me to write.

After writing one hundred thousand cathartic words, I started writing fiction. I also discovered the stage. I performed in The Abandoned Minds, an improv-comedy group. I wrote for and performed in, The Mending Dialogues, a theater troupe, that examined how violence impacts our lives. I dabbled with standup comedy and acting in independent films. It felt good to be back among the living. Love and laughter were back in my life, and so were the memories of war.

Giving Back to other Veterans

In the fall of 2010, I volunteered to be a driver for the Disabled American Veterans. We transported disabled veterans to the VA hospital in Prescott, Arizona. The irony of this was, I had never signed up with the Veterans Administration for any kind of help. I had so many good experiences at the VA hospital in Prescott; I gave up the mistrust so common to Vietnam veterans.

In the spring of 2011, I registered with the Northern Arizona VA Healthcare System. The treatment for PTSD I received there has given me more than hope. The staff gave me the tools I desperately needed to take control of my life. My wonderful friends and family offered their love and encouragement. I accepted that gift and I have finally and truly come home.